The Beauty of the Hellebore


Hellebore Care – How To Grow Hellebores 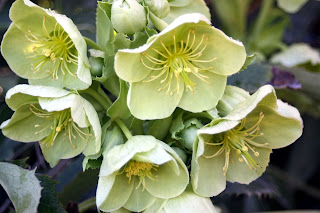 Flowers of hellebores are a welcome sight when they bloom in late winter to early spring, sometimes while the ground is still covered with snow. Different varieties of the hellebore plant offer a range of flower colors, from white to black. One of the earliest blooms spotted in many areas, nodding hellebore flowers are often fragrant and long-lasting.
Growing hellebores is a worthwhile task for the gardener. Aside from lovely and unusual flowers, the hellebore plant has attractive green foliage that is aesthetically pleasing in the landscape. Once established, hellebore care is minimal. This herbaceous or evergreen perennial is disliked by deer and other animal pests prone to munching on plants. All parts of the hellebore plant are poisonous, so take care to keep children and pets away. 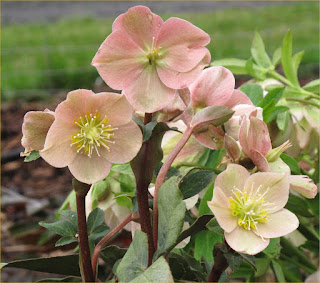 Tips for Growing Hellebores
When planting from seed or division, place the hellebore into well-draining, organic soil in a filtered sun or shady location. The hellebore plant will return for many years; make sure the space will accommodate growth and has proper sunlight. Hellebores need no more than a few hours of dappled light and grow successfully in shady areas. Plant the hellebore under deciduous trees or scattered through a woodland garden or shaded natural area
Soaking the soil in which the hellebore is growing helps the hellebore plant to look its best. Hellebore care includes removal of older leaves when they appear damaged. Care for hellebores should also include careful fertilization. Too much nitrogen may result in lush foliage and a shortage of blooms.
Plant hellebore seeds in the fall. A 60-day moist chilling period is needed when planting seeds of the hellebore plant. Planting seed in fall allows this to happen naturally in areas with cold winters. Wait three to four years for blooms on young plants grown from seed. Divide overgrown clumps in spring, after flowering or in autumn.

Types of Hellebores
While many varieties of hellebores exist, Helleborus orientalis, the Lenten Rose, is among the earliest of winter bloomers and offers the widest selection of colors.
Helleborus foetidus, called the stinking, bear foot or bear paw hellebore, offers flowers in a pastel shade of green and has an unusual fragrance disliked by some; consequently it may be referred to as stinking. Foliage of the bear foot hellebore is segmented and serrated, sometimes turning to deep red in cold weather, when it is highly ornamental. Flowers may be edged in the deep red to burgundy color. This hellebore plant prefers more sun than its oriental counterparts.
Helleborus niger, the Christmas Rose, features 3-inch blooms of the purest white. Many hybrids of hellebores offer a range of flower colors, colors often change as they mature.
Hellebore care is simple and worthwhile. Plant a variety of hellebores in your garden in the shade for a lovely spring flower.

Posted by Color Burst Landscapes Bloomin' News at 9:23 AM No comments:

I am sure most of us are now starting to daydream of sunshiny days and the beautiful blooms that spring will be sure to bring. We all know that daffodils and tulips are the first show stoppers of spring but here are just a few more of our favorite early bloomers which thrive in Middle Tennessee, and are a sure sign the springtime is on the way. 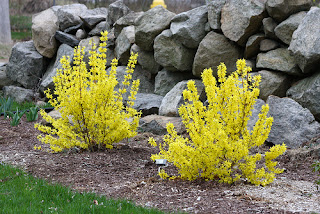 This beautiful shrub comes in many varieties, but they all have this in common: they are one of the earliest blooming shrubs in our area and they produce beautiful, long, graceful stems of sweet yellow flowers. Forsythia loves to be planted in sunshine! They are hardy shrubs that require little maintenance. Some varieties of forsythia can grow large (unless you pick up a type such as ‘Gold Tide,’ which is a ground cover forsythia that gets to be about 2 feet tall and 5 feet wide), but all types can be easily pruned. 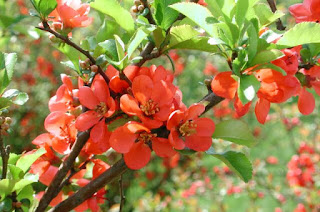 Another early springtime bloomer, Flowering Quince produces show stopping blooms of red, pink, white, or orange (depending on variety). Like Forsythia, they love sunshine and do best with 6-8 hours of direct sunlight daily. Their gorgeous blooms last typically up to two weeks; by cutting flowering stems and bringing them indoors, you enjoy the bloom period even more. Sizes vary with each variety, from smaller ones reaching 3 feet high by 3 feet wide at maturity, up to 10 feet high and wide at maturity. Simple pruning can be done once a year to keep Flowering Quince at the appropriate size for your yard. 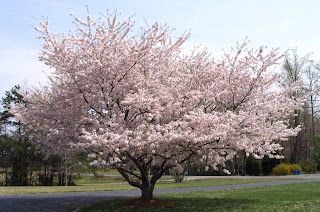 About a month before dogwoods and redbuds are beginning to bloom, Yoshino and Kwanzan cherry trees begin to bloom in our area, lighting up landscapes all around Middle Tennessee with beautiful clusters of delicate pink to light pink blooms (Kwanzan is known for its brighter pink blooms, whereas Yoshino cherry trees boast the light pink/ almost white buds). As far as early spring blooming trees, you just cannot beat flowering cherry trees. Their name can be confusing, as they are not actual fruit producing cherry trees. These trees enjoy full sun, and at maturity, they are not huge (15-25 feet height and spread), so they can make for a great ornamental tree in your garden.

Be on the lookout for these amazing beauties, and rest assure spring is indeed on its way!

The Basics- Rhododendrons and Azaleas 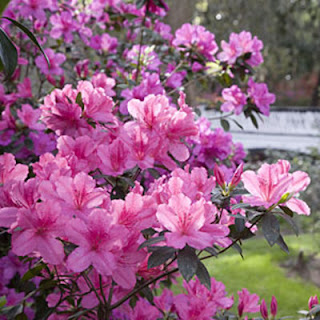 Rhododendrons and azaleas are arguably the South’s favorite shrubs. Many people think of them as entirely different plants, but they both belong to the genus Rhododendron. One difference between the two groups is obvious: rhododendrons generally have much larger leaves. Also, rhododendron flowers are bell shaped and have ten or more stamens, while azalea blooms are typically funnel shaped and have five stamens.

Rhododendrons generally do better in the Upper and Middle South, though a number of selections thrive in the Lower South.  Azaleas, however, are more accommodating; with the necessary attention to soil, light, and proper selection, they can be grown throughout the South.

Rhododendrons and azaleas have much the same basic requirements for soil and water. They need acid, well-drained, organically enriched soil that should neither get too dry nor remain soggy. Planting in heavy clay is a no-no: root rot often ensues, indicated by yellowing, wilting foliage and collapse of the plant. Planting in limy, alkaline soil is another mistake; lack of iron quickly results in chlorosis (yellow leaves with green veins).

Plant azaleas and rhododendrons with the top of the root ball slightly above soil level. Don’t cultivate around these plants, as they have shallow roots. Because they absorb water through their foliage, wet both the leaves and root zone when you water. Overhead watering with sprinklers works well, but to prevent fungal diseases do this in morning so that leaves dry by afternoon. Avoid drip irrigation―it doesn’t wet the root system uniformly.

In spring, just after the blooms fade, apply mulch and fertilize with a controlled-release, acid-forming fertilizer such as cottonseed meal or commercial azalea/camellia food. Do not mulch in fall; this will hold heat in the soil and delay the onset of dormancy, increasing the chances of winter damage. And don’t fertilize before bloom―you’ll encourage leafy growth at the wrong time.

The sun tolerance of azaleas and rhododendrons varies by species and selection. In general, most types prefer the partial sun or filtered shade beneath tall trees. The east and north sides of the house are better locations than the west and south. Too much sun bleaches or burns the leaves; too little results in lanky plants that don’t bloom. 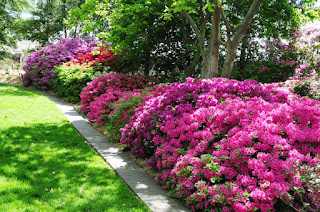 Pruning rhododendrons is simple―just follow these general guidelines. Tip-pinch young plants to make them bushy; prune older, leggy plants to restore shape by cutting back to a side branch, leaf whorl, or cluster of latent buds. Do any extensive pruning in late winter or early spring. Pruning at this time will sacrifice some flower buds, but the plant’s energies will be diverted to latent growth buds, which will then be ready to push out their new growth early in the growing season. You can do some shaping while plants are in bloom; use cut branches in arrangements. To prevent seed formation, which can reduce next year’s bloom, clip or break off spent flower trusses, taking care not to damage growth buds at base of each truss.

Evergreen azaleas are dense, usually shapely plants; heading back the occasional wayward branch restores symmetry. To keep bushes compact, tip-pinch frequently, starting after flowering ends and continuing until mid-June. Prune deciduous azaleas while they are dormant and leafless. You don’t have to prune azaleas as carefully as you do rhododendrons―the leaves are fairly evenly spaced along the branches, with a bud at base of each leaf, so new growth will sprout from almost anywhere you cut (in either bare or leafy wood).

Color Burst Landscapes Bloomin' News
Since 1987 Color Burst Landscapes operating under the name of AAA Lawn Care has provided award winning installations and ground maintenance for commercial and residential clients. We are well-known throughout Tennessee and the Nashville area for quality design, installations, and maintenance with extensive knowledge of the green industry. Color Burst “seasonal flower displays” are sought after all across the southeast and is the leader for setting the standard in annual color.